Your review for Konquest 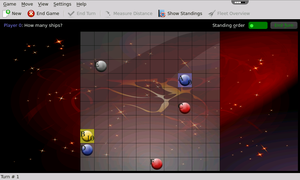 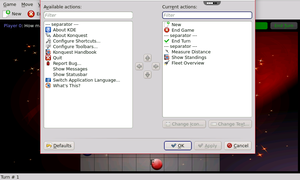 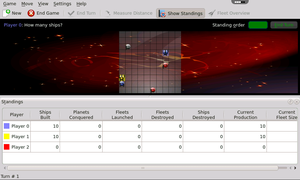 Players conquer other planets by sending ships to them. The goal is to build an interstellar empire and ultimately conquer all other player's planets.

When you start Konquest, press New Game to start a new game you will see a dialog in which you need to enter player names, decide the number of planets, and how many turns are allowed. You can also use the reject button to get a new map. When you're done, click OK to start the game.

Once the game starts, you will be presented with the game board. Blank squares are empty space, while filled squres identify the existing planets.

At first, each player owns one planet. The planet's background is the player color. If you move your mouse over a planet, you can view additional information. On planets which have not yet been conquered by anyone, you will only see the planet's name. The information includes:

To send ships from one planet to another, select the planet you want to send ships from, enter the number of ships in the green box in the upper right corner and press enter. Repeat this procedure until you have sent out all the ships you want. When you're done, press End Turn. When all players have played one turn, dialog boxes will appear and give you the latest news. The game will proceed like this until one of the players owns the entire galaxy.

Reviews for Konquest Login to add a review