Your review for Mahjongg 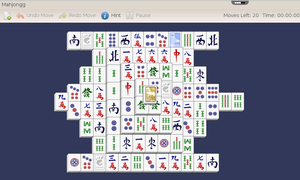 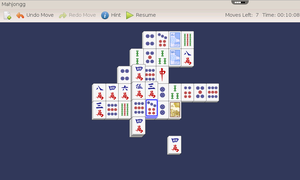 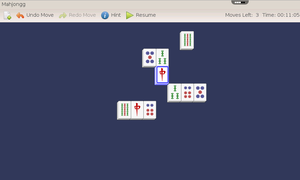 Mahjongg is a solitaire (one player) version of the classic Eastern tile game, Mahjongg. The objective is to select pairs of similar tiles.

Mahjongg's origins are not fully known, but many theories have been put forth. One such theory says that Noah played Mahjongg on the ark because the East hand is dominant, presumably the direction the rains came, in the flood. Another theory says that the Chinese philosopher, Confucius, made the game.

You start with five levels of tiles which are stacked so some are covered up by the tiles on top. The harder the level you set in the Preferences dialog, the more tiles are covered when the game starts. The object of Mahjongg is to remove all the tiles from the game. To remove tiles you have to find matching pairs which look alike. A matching tile will usually have the same number of buttons or markings on it or will look similar to each other.

Reviews for Mahjongg Login to add a review