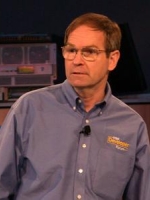 Richard Wirt, M.S., Ph.D., is Managing Director and General Partner at Oxantim Ventures. Dr. Wirt is a senior technology executive with 35 years of experience in the computer industry, was Vice President and General Manager of Intel Corporation’s Software and Solutions Group. He developed and nurtured the Intel software group from when he founded it in 1982 to a 3000 person worldwide operation in 2007. Working closely with Intel Capital, Dr. Wirt made many successful worldwide investments including 10 large acquisitions of software companies. Operating at the highest executive level, Dr. Wirt worked with Intel industry partners such as Microsoft, Dell, Oracle, HP, IBM, NEC, Fujitsu, Redhat, and many others, building ecosystems to grow Intel’s processors’ market while maintaining more than 85% market share. In 2007 Dr. Wirt also served as Chief Scientist and Executive Vice President at In-Q-Tel, a technology investment group that supports the U.S. government.