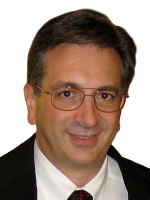 He is founder and owner of RAI Laboratory LLC – a firm that develops advanced mobile computing technology. Bob is also a consultant, advising clients on mobile systems strategy.

Previously, Bob was Chief Technology Officer and Head of the worldwide Research Center for Nokia. As CTO, he initiated and led two major initiatives to fundamentally re-think and redesign the Nokia user interface and to re-architect Nokia phones at the silicon system level.

Bob played a defining role in Nokia's research and development work, transforming new technology creation from a closed- to an open-innovation model. As head of the research center, he opened new laboratories as joint efforts with MIT, Stanford, the University of Cambridge (nanotechnology) and other leading institutions to transform Nokia’s technology creation ecosystem beyond hardware to internet-based, developer-focused software platforms.

Bob holds a Ph.D. in Electrical Engineering and Computer Science from the Massachusetts Institute of Technology, and is the author and co-author of two books and several academic papers.

Learn more about Bob Iannucci on his website at http://www.iannucci.org/