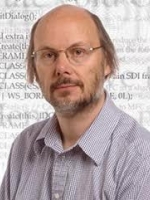 Bjarne Stroustrup is the designer and the original implementer of C++, one of the world's most popular programming languages. Dr. Stroustrup is a Distinguished Professor and holder of the College of Engineering Chair in Computer Science at Texas A&M University. Dr. Stroustrup was the head of the AT&T’s Large-Scale Programming Research Department from its creation in AT&T Bell Labs until late 2002 when he joined the Texas A&M University. He still retains a link with AT&T Labs as an AT&T Fellow. He is also a Fellow of the ACM and IEEE, and was elected a member of the National Academy of Engineering in 2004.

He is the author of several books (translated to at least 19 languages) as well as many academic publications on C++ programming. To learn more about Bjarne Stroustrup, visit http://www.stroustrup.com/