Your review for Gambas 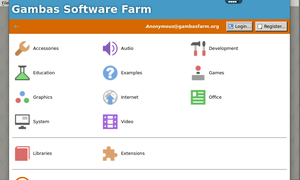 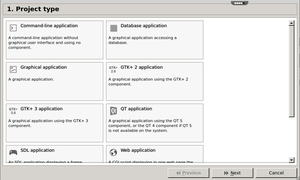 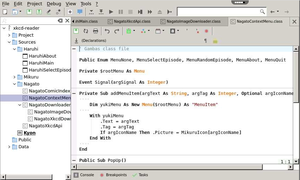 GAMBAS is an implementation of a graphical development environment based on a BASIC interpreter and a full development platform. It is very inspired by Visual Basic and Java.

Gambas is designed to build graphical programs using the Qt (currently Qt 4.x or 5.x) or the GTK+ toolkit (GTK 3.x also supported as of 3.6.0); the Gambas IDE is written in Gambas. Gambas includes a GUI designer to aid in creating user interfaces, but can also make command line applications, as well as text-based user interfaces using the ncurses toolkit. The Gambas runtime environment is needed to run executables.

Functionality is provided by a variety of components, each of which can be selected to provide additional features. Drawing can be provided either through Qt and GTK+ toolkits, with an additional component which is designed to switch between them. Drawing can also be provided through the Simple DirectMedia Layer (originally version 1.x, with 2.x added as of 3.7.0), which can also be utilized for audio playback through a separate sound component (a component for the OpenAL specification has also been added). GPU acceleration support is available through an OpenGL component, as well as other hardware functionally provided by various other components. There are also components for handling other specialized tasks.

With Gambas, developers can also use databases such as MySQL or PostgreSQL, build KDE (Qt) and GNOME GTK+ applications with DCOP, translate Visual Basic programs to Gambas and run them under Linux, build network solutions, and create CGI web applications. The IDE also includes a tool for the creation of installation packages, supporting GNU Autotools, slackpkg, pacman, RPM, and debs (the latter two then tailored for specific distributions such as Fedora/RHEL/CentOS, Mageia, Mandriva, OpenSUSE and Debian, Ubuntu/Mint).

No reviews yet. Share your thoughts with others first! Login to add a review